The next chapter from Craig & Fred,
​Available Now!!
​Order here or at your local bookstore! 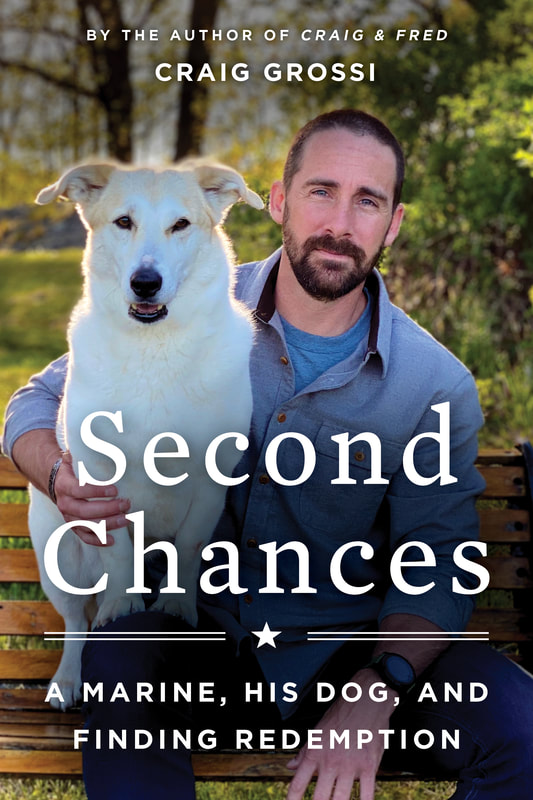 The author of the heartwarming Craig and Fred tells the deeply emotional and inspiring story of the next phase of their lives together: working closely with prison inmates in Maine who raise and train puppies to become service dogs.

On their travels across America, former US Marine Craig Grossi and his devoted dog Fred were invited to speak at Maine State Prison—the penitentiary that inspired Stephen King’s famous “Shawshank.” While there, he met a group of very special inmates, participants in a program run by the non-profit America’s Vet Dogs.

Craig discovered that many of the prisoners are veterans—former soldiers serving their country in an entirely different way: transforming purebred Labrador Retrievers from floppy puppies into indispensable companions for disabled vets. These service dogs “literally and figuratively” open doors for men and women, offering hope and a renewed sense of freedom—"freedom that they lost as a result of trauma incurred defending our freedom,” Craig writes.

Yet these disabled vets are not the only lives changed by these dogs. The inmates who train them “are given a purpose, they’re given experience, and most importantly they’re given a sense of self-worth,” Craig explains. “The men at Maine State are given a second chance—something that I believe everyone deserves.” For Craig, the visit had a profound impact. “There was something special going on inside its walls and it was calling out to me. I quickly realized that the program and its men had something to show the world.”
​
In this emotionally powerful book, he introduces these men and challenges us to look deeper, to see them as human beings deserving of a new shot at life. “We’re quick to give second chances to celebrities, politicians and famous athletes when they screw up,” Craig reminds us, “but when it comes to those who’ve been convicted for their mistakes, we too often dismiss them as forever lost.” Second Chances poignantly shows that no life is irredeemable and that each of us can make a difference if given the opportunity.

CRAIG & FRED
A MARINE, A STRAY DOG, AND HOW THEY RESCUED EACH OTHER

The uplifting and unforgettable true story of a US Marine, the stray dog he met on an Afghan battlefield, and how they saved each other and now travel America together, "spreading the message of stubborn positivity."

In 2010, Sergeant Craig Grossi was doing intelligence work for Marine RECON—the most elite fighters in the Corps—in a remote part of Afghanistan. While on patrol, he spotted a young dog "with a big goofy head and little legs" who didn’t seem vicious or run in a pack like most strays they’d encountered. After eating a piece of beef jerky Craig offered—against military regulations—the dog began to follow him. "Looks like you made a friend," another Marine yelled. Grossi heard, "Looks like a 'Fred.'" The name stuck, and a beautiful, life-changing friendship was forged.

Fred not only stole Craig’s heart; he won over the RECON fighters, who helped Craig smuggle the dog into heavily fortified Camp Leatherneck in a duffel bag—risking jail and Fred’s life. With the help of a crew of DHL workers, a sympathetic vet, and a military dog handler, Fred eventually made it to Craig’s family in Virginia.

Months later, when Craig returned to the U.S., it was Fred’s turn to save the wounded Marine from Post-Traumatic Stress. Today, Craig and Fred are touching lives nationwide, from a swampy campground in a Louisiana State Park to the streets of Portland, Oregon, and everywhere in between.
​
A poignant and inspiring tale of hope, resilience, and optimism, with a timeless message at its heart—"it is not what happens to us that matters, but how we respond to it"--Craig & Fred is a shining example of the power of love to transform our hearts and our lives.